The kids at church were asked to volunteer their own money to help the children in Cambodia. Unfortunately we were unable to attend kids church on the day, so Elizabeth decided she would contribute to raising money for Nepal instead.

Elizabeth decided to organise a raffle. She carefully cut up squares of paper for the tickets and used her own money to buy the prize - a packet of mixed lollies which contained 150 lollies. She sold the tickets for 50c each, and raised $35.75 in total (some people gave more than the cost of the ticket). The draw was on the 19th of September and the proceeds were given to kids church the following day.   Elizabeth, that was such a creative and fun way to raise money.  We are so proud of you!!

The whole of J-Team raised $82.75 for the people of Nepal who have been affected so badly by the earthquake.  We have such amazing children who are so generous!! 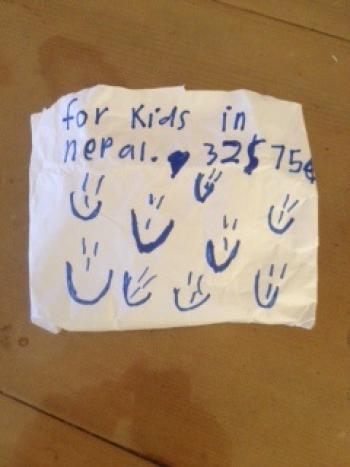